On Man, Men, And Manhood 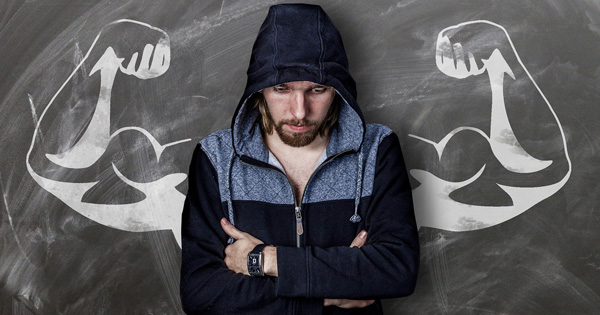 In the beginning there was man or so it was written, but what is a Man? I ask this because when I come to think about it, I seriously don't know. I mean I understand it's a gender based on a certain anatomy but what is a Man really?

I see women online (pick your social network) and they're always posting, reblogging, memeing pictures of what a real man does or is. Maybe you're like me, you go along to get along and this keeps the peace but it doesn't make much sense or offer peace of mind. Well it's nice to know you're not alone in this boat.

Culture, namely music and movies have given us much of our ideas of what a man is supposed to be. Go back 50 years ago and a Man was John Waynish, he fought, he took a pounding, he put down the law, he respected the law but he was also a character. Not that his values or movie lines were wrong per se.

This leads me to question, is a man a man because of his age, his size, his actions, his interest, his integrity, his muscles, his mustouche, his height, his money, because he has children, the government defined age bracket, his biological functions or a combination of all of the above?

I still haven't arrived at a satisfactory answer but if I were to cherry pick here, sort of like Build-a-Bear, instead Build-a-Man, the qualities a man would have, I would pick the strongest and finest aspects, apply them to a mold, add water and presto... Man!

Adulthood and Manhood from a skewed childhood perspective

As a child I remember thinking about how cool it was going to be to be an adult. You know being an adult was so much cooler than being a kid because as far as I knew, you could:

This is all I knew about adulthood. Little did I know there were things included in adulthood like paying bills, working a full-time 40hr a week job, and that woman you slept naked with in bed getting knocked up producing a baby. Starting a family means you'll want to have a home of your own so think of all the things that come attached with home ownership. This Quicken Loans commercial gives you a pretty good idea.

This also leads me to the my next point. Growing up with other childhood boy friends (that's friends that were boys!) also grew older. Hanging out with them would make us a group of Men or a pack of wolves depending on how you look at it.

Grown up boys in association become a group of Men

Here in America as well as everywhere else we have social norms (some of which are coming apart as you read this) these norms have placed values upon us. Depending on what kind of family you grew up in your parents passed on to you what their parents passed on to them. Then you have community values you pick up when you attend a church. Then there are the workplace values you pick up in the workplace.

Now the rules for being a man can vary from man to man, being placed in any group of men will show you this. For instance, one man due to his upbringing might find it unacceptable to cheat on his girl while a different one might find it acceptable to do so every chance he gets!

This is reality but media tries to imprint on all of us the same set of values, or a range of them I should say. Look at tell-lie-vision today and you have shows like Empire or Modern Family with openly homosexual characters, who appear to be men I might ad!

Oh yeah, then you have the religious folks with their definition. Which could differ from a set of gang bangers definition of what a man is supposed ot be. Who fucking knows, is your head hurting yet? This is just part of what we accept as everyday that needs some sorting out but many will not question this to the degree I have. They will conclude this as silly and dismiss it. But all I'm asking is where is it written in stone what a man should or will be, ya see?

Again grown up boys in close associate become a group of men, and when you head out into the world you get introduced to other men who might leave in impression on you or influence you in some way.

Crossing the bridge from Childhood to Manhood

As boys we use to do mean things to girls we liked, well some of us (my hands up), others were sweethearts (I was sometimes), others pretenders (I was this too at times depending on who the girl was). Growing up isn't easy because you have everyone else's values and expectations imposed upon you to conform and be a certain way.

Maybe this is a good thing for the sake of keeping the social fabric together but at the same time it's artificial and false in my eyes. At the heart of all these exist you as the living breathing person. Maybe you disagree with these values that are imposed upon you but the fact remains we all had to cross that bridge from one thing to another.

Manhood values change as you age and so does the definition. See, it's a little hard to pin down exactly what this man and manhood business is. At one time for me manhood was sowing my royal oats with as many women as I could, now that's morphed to handling my business and tuning out distraction. But you see, those are some of my values, I don't know what your definition of manhood is but I ask you to seriously sit and question it.

Questioning things is a negative in today's society. It shows you're uncertain, well there's a lot of shit I'm uncertain about these days and not asking questions keeps me conveniently trapped in the confines of ignorance.

By the way this fear of not asking questions has worked well for a long time and benefited fraudsters in Government that with the help of media has concealed fraudulent activities from the American public. That brings me to another set of values a man should know the law and understand his relationship to Government.

This is something i'll touch more upon later for now just understand that it works to others advantage when you fail to ask questions.

This is something else we can add to being a man and emerging into manhood, but this is only my opinion, a man isn't afraid to ask the hard questions or fear what he'll find out upon asking them.

In other cultures there's a right of passage to celebrate the moment when a young boy crosses the bridge in young manhood. Not all of us have experienced this right of passage. Some of us have learned from hanging around other young boys who were trying to identify their manhood that you become a man when you lose your virginity.

Ladies now you understand why perhaps so many young men think with their penises because of the values they've been given, not that you would know what a man is either but assuming you did, that could help you in selecting one I guess.

As I close I'd like you to think about how you define your manhood. Since there really is no set in stone "This is what a man is" monument, you get to define your flavor of it. Has your definition of Man been influenced by family, friends or society at large? Keep in mind where you've derived your values from because sometimes we pick up things that aren't useful for a time but end up carrying them around far longer than needed.

That's another value that a man has, in my opinion, that's the ability to drop things that no longer serve him such as anger, a bad time etc etc.

"He that will not apply new remedies must expect new evils; for time is the greatest innovator."
— Francis Bacon